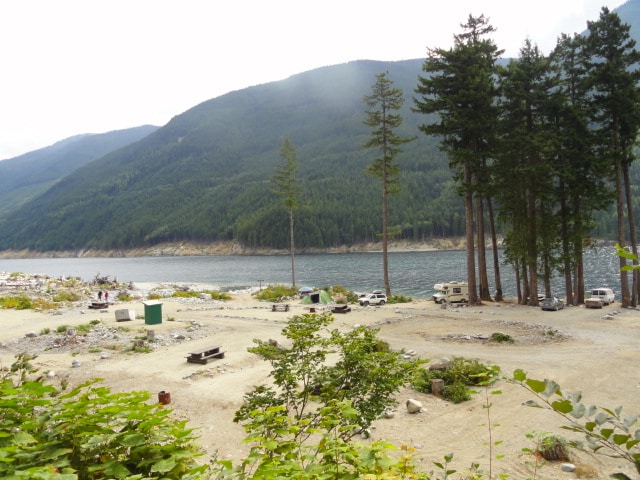 When Recreation Sites and Trails BC agreed to re-open Skwellepil Creek Rec Site under 4WDABC oversight three years ago, it was to be on a trial basis, to see how the off-road community as a whole could look after such a large campground.

We’ve had some amazing volunteers come out and put in a ton of elbow grease, cleaning things up, building new outhouses, installing new fire pits, even rebuilding the boat launch. For the most part, the campers have been clean, respectful, and appreciative of the efforts, and we thank all the workers and visitors who have made this site successful.

Unfortunately, the few bad apples have also caused problems: the gate broken or bypassed and lock cut on several occasions while the site was closed under COVID restrictions, human waste left between campsites, outhouses shot up and damaged, boat launch blocked by campers and dismantled by moving the rocks and cutting up the logs lining it for firewood, loud parties running late into the night, and general behaviour disrespectful of the site and of other campers.

It’s to the point that two more planned outhouses for the site have been put on hold until this issue is resolved. So now the trial enters a new phase: it was always RSTBC’s desire for this to be a 4×4-only site, and now with the ongoing disrespect to the grounds and the work put in by volunteers, we have been directed to add some significant skill-based obstacles to the driveway, both above and below the gate to limit traffic.

Initially, this will take the form of several substantial cross-ditches, to be created within the next week or so. These will stop most vehicles without true 4WD and good clearance from entering. No doubt some will try to defeat these measures, so if problems continue, the obstacles may be upgraded to large “elephant humps”.

Signage will be added at the start of Chehalis FSR informing of the change, so people don’t waste time driving their cars up. This will be coupled with a social media campaign shared on as many channels as possible. Consider this post notice of the upcoming changes, which are expected to be fully implemented before the end of July.

The option of adding a host and daily camping fee has been suggested and may be implemented for next year, as there are processes that must be followed first that would probably take until the end of summer anyway.

Ultimately, the community must be better at self-policing usage of the site, or it will be closed again… permanently. That means multiple large lock-blocks before and after the gate or the road dug out completely, leaving it hike-in or boat-in access only.

Continued access to this site is the responsibility of ALL users. Remember to pack out what you pack in. Use the outhouses, not a log beside your campsite. Leave the outhouses clean and in good repair. If there’s work that needs to be done, send an email to maintenance@4wdabc.ca when you get back to signal (photos are always helpful). If you witness irresponsible or illegal actions at the site (particularly damaging infrastructure), try talking to them, asking nicely… and if that fails, follow Observe, Record, Report protocol: you can report to the RAPP line by phone (1-877-952-RAPP) or website (https://forms.gov.bc.ca/environment/rapp/) when you return to signal (again, photos and videos are always helpful). The BC Wildlife Federation’s Conservation app (available for both iPhone and Android) can help you create a report.

We realize some will not be happy with these changes, but this is the result of human action, and inaction, in caring for this site, and is only being taken after numerous warnings. Comments or complaints should be directed to Recreation Sites and Trails BC via the FrontCounter BC portal: https://portal.nrs.gov.bc.ca/web/client/contact

**PLEASE SHARE THIS WITH YOUR OTHER BACKROADS, CAMPING, ETC. GROUPS; WE DON’T WANT PEOPLE DRIVING ALL THE WAY UP THERE TO FIND THEY CAN’T GET IN.**

In response to Frequently Asked Questions:

Q: Will my [insert vehicle/lift/tires] still be able to get in?

A: We have no set plan or design for the obstacles; that will be decided on-site by the excavator operator, 4WDABC reps, and possibly RSTBC rec tech. Initially they will be in the form of significant cross-ditches both before and after the gate. The best advice we can give at this point is to go up and check it out after the work is done. Driver skill is so much a part of it, it’s difficult to say how different vehicles will fare.

Q: When is this happening?

A: As of July 20, the planned date for the work to start is Monday, July 25. We expect the work to be completed by the end of day.

Q: What about having a camp host instead, to keep things quiet?

A: That’s is an option being considered for next year, but the process to determine camp fees and put a host in place is too lengthy for it to be done by the end of this year’s camping season. RSTBC wants changes in place ASAP.

Nothing much, just had surgery last week and checking out member’s activities. Wishing to be out there again soon.

If you fish at Barnes Lake near Ashcroft, don’t bother. There was a mass fish die off. We go up nearly every weekend and no one has caught anything for over a month.